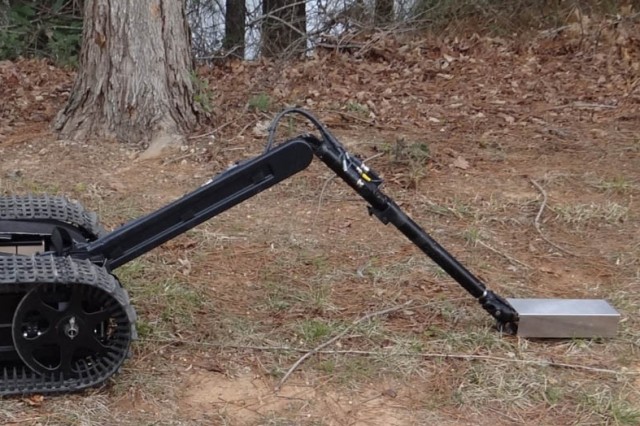 RESEARCH TRIANGLE PARK, N.C. — Landmines pose a serious threat in conflict areas, yet modern detection systems struggle to discriminate between explosives and clutter. A project funded by the Army developed a new method for landmine identification that will greatly reduce false alarm rates.

Fewer false alarms will significantly reduce the cost of humanitarian landmine clearance operations and provide greater road mobility by avoiding unnecessary route detours. With this new technology, landmines can be detected without digging.

“New concepts are rare in the area of landmine detection,” said Dr. James Harvey, program manager, ARO. “This advance has the potential to be a game changer.”

The Night Vision and Electronic Sensors Directorate of the U.S. Army CCDC C5ISR Center supported the research as a part of an Army Small Business Technology Transfer award managed by ARO.

Most conventional landmine detectors are based on detecting the electromagnetic signature of the mine itself, which can easily be confused with other buried metal objects or wet or magnetic soil patches.

With this new technology, published in the proceedings of the 2020 SPIE Defense & Commercial Sensing Conference, the small metal parts inside the landmine are stimulated to vibrate using a pulsed magnetic field. Most other buried objects don’t respond to the magnetic pulse and those that do have very different vibrational characteristics. The vibrations are detected by a unique high dynamic range vibrometer that can distinguish closely-spaced low-frequency vibrations.

“This new capability resulted from combining exciting results from several previous ambitious research projects and is an outstanding example of the transition from university basic research to new military and commercial technology capabilities,” said Professor Michael Steer, a NC State research partner. “The mathematical algorithms behind the detection depend on understanding the details of the interaction of magnetic fields, radar pulses, and vibrating components within the landmine as well as with the properties of various soil and clutter objects. Advancing university physical models and analysis continue to support the improvement of the detection algorithms.”

As part of that award, the research team will work to miniature and ruggedize the detection device for reliable outdoor testing at an Army range. The researchers also will collect data from real landmines in a variety of soil conditions and demonstrate the performance of the technology in demanding and stressing field conditions.